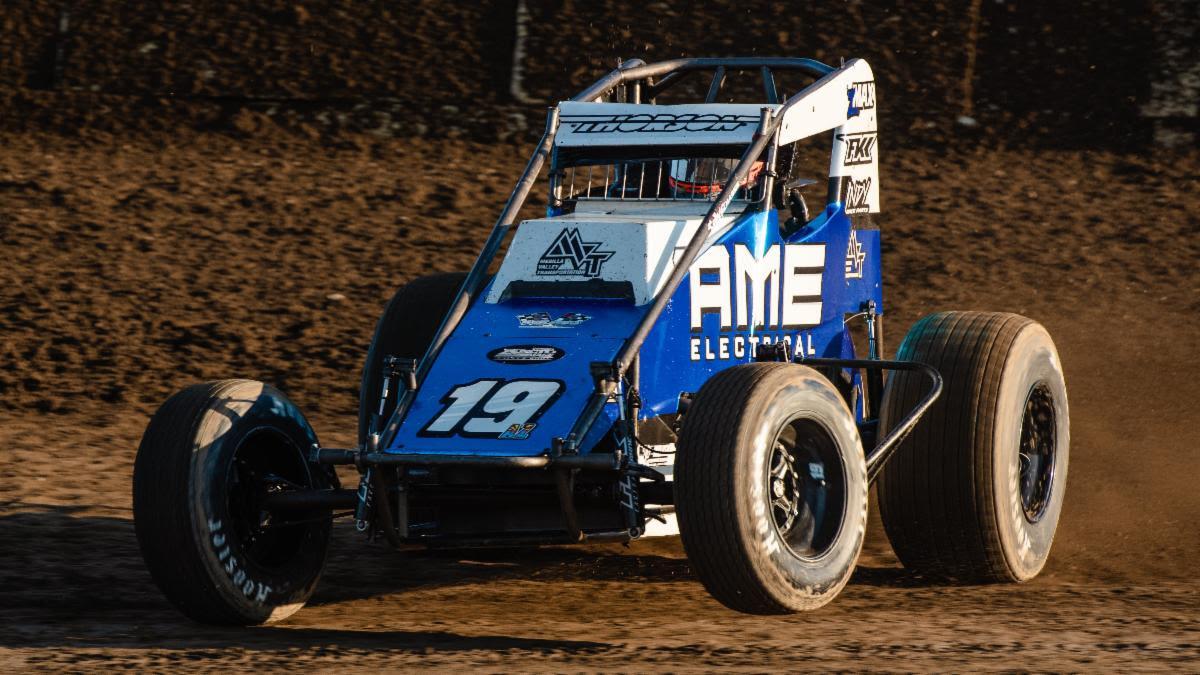 By Richie Murray, USAC Media (Indianapolis, IN) -- No driver has won more often during the 2021 USAC National season than Tanner Thorson. Likewise, no driver has been victorious more often under the Friday night lights this season than he.

The Minden, Nevada driver added another one to his most prolific USAC campaign yet on this particular Friday evening, leading all 30 laps and threading the needle to avoid catastrophe along the way en route to the win in the series’ debut at Circle City Raceway, the first USAC National Sprint Car event held at a dirt track in Indianapolis, Indiana since 1984.

Thorson collected his series-leading 12th USAC National victory of the year, five of which have come on a Friday night. His fifth USAC AMSOIL Sprint Car National Championship feature victory of the season came amid a close call early in the going after leading the first 10 laps of the event in relatively comfortable fashion.

On lap 11, as Thorson was just beginning to work his way into traffic, turn two became calamity corner. With Thorson following just feet behind, the 20th and 21st place cars of Travis Berryhill and Jadon Rogers made bumper-to-bumper contact at the top of the second turn, sending Berryhill into a spin.

The quick acting Thorson mashed the gas, shot the narrow gap, and split the difference between Rogers and Berryhill to escape without harm and without foul in his Reinbold-Underwood Motorsports/AME Electrical – CSI – Mesilla Valley Transportation/Spike/Stanton Chevy.

As Thorson escaped the escapade, the same couldn’t be said for a few others. Berryhill’s landing spot for his spin just happened to be right into the path of second-running Brady Bacon who locked up his brakes and broadsided the sitting car of Berryhill at the bottom of turn two before coming to a stop.

Moments later, 17th running Ricky Lewis clipped the turn three infield tire and flipped wildly several times, eventually coming to a rest upside down in turn four. The Ventura, Calif. native, who was up until 9am that morning constructing his brand-new racecar, walked away without injury.

When action resumed, it was second-running Kevin Thomas Jr. taking repeated runs at Thorson at the top of the pedestal. Thomas worked the bottom with Thorson never straying from the top. Thomas came within a half-car length of Thorson at the stripe on both laps 13 and 14, then gradually slipped back to a full length on lap 15, two lengths on lap 16 and more beyond the 17th circuit.

During Thomas Jr.’s surge, similar circumstances were occurring for Emerson Axsom, who ran ninth during the lap 11 restart and had worked his way up to third by the time eighth running Thomas Meseraull spun to a stop onto the edge of the infield grass in turn two on lap 21.

On the ensuing lap 22 restart, Axsom pulled no punches and wasted little time in continuing his spurt to the front of the field. In turn three, Axsom shot to the bottom to slide past Thomas Jr. However, midway through the turn, as Axsom skated up to the cushion, his car became just a tad too sideways.

The trailing Thomas Jr. tried but couldn’t avoid the contact, his front bumper nudging the left side nerf bar of Axsom, which straightened Axsom out. Both kept going, after nearly halting. As they gathered their horses up, Chris Windom and Jake Swanson raced under the pair while C.J. Leary went around the outside of both, completely knocking both out of the top-five in the running order.

The trouble that transpired behind was a-okay with Thorson, free without a major challenge the rest of the way to win the $5,000 top prize with Windom, Swanson, Bacon (who restarted 20th on lap 11) and Leary rounding out the top-five.

“I was just holding him off there at the end,” Windom recalled of keeping J. Swanson at bay. “We probably weren’t the winning car there, but we got a little better on the last restart. I adjusted on my shocks a little bit but didn’t quite get tight enough to be good off the bottom all while Tanner was hitting his marks on the top. It was kind of hard to reel him in at that point.

Jake Swanson (Anaheim, Calif.) had a tumultuous ride on the way to a 3rd place result in what was his fourth podium finish of the season in his Team AZ Racing/USW Cat Construction – RSS Industries – CSI/DRC/1-Way Chevy. An incident during the heat race forced his crew to swap out front ends, and ultimately, the team was forced to transfer their way through the night’s semi-feature.

Swanson’s first appearance at the 1/4-mile dirt oval led him from a 10th place starting spot and into the top-three at a venue he likened to a Midwest version of California’s Ventura Raceway.

“The fact that we can dig ourselves out of these holes, that’s big. That means a lot,” Swanson said. “You have to be able to do that; that’s what wins races and wins championships. I don’t think we wanted to practice changing front ends, but we did. We can fine tune. It was good to drive by guys and roll up through there, but we just need to start up front to feel like we’ll be in position. We can’t have bad luck like that in those heat races and have problems like that because it just buries you too deep.”

**Andrew Prather flipped during the semi. Ricky Lewis flipped on lap 11 of the feature.