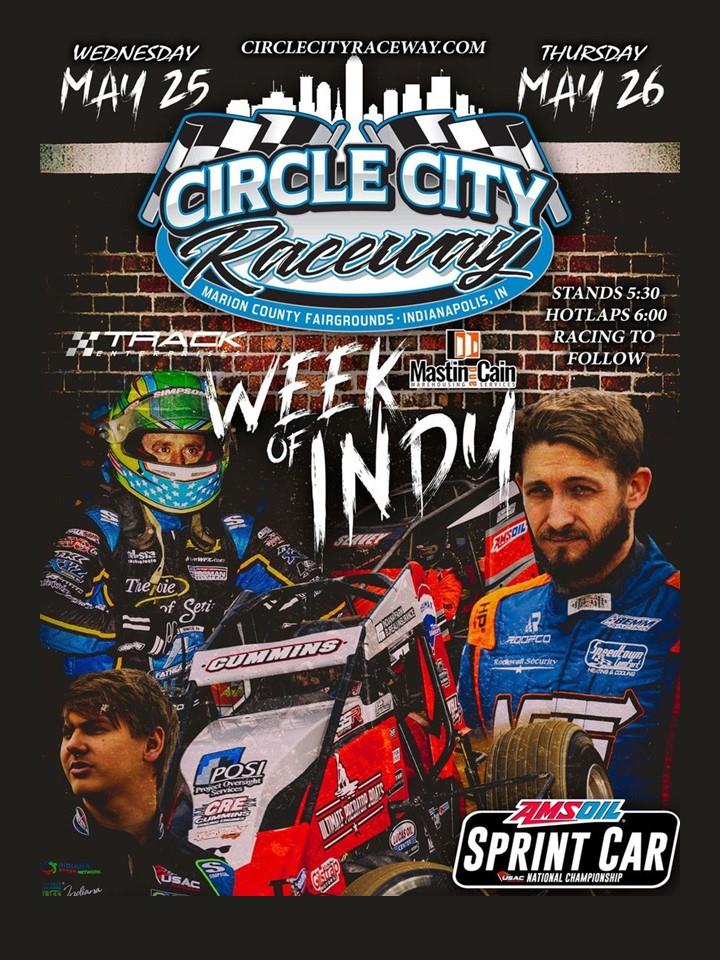 (Indianapolis, IN) One of the biggest weeks in racing will see the return of some of the greatest wheelmen on dirt making their second appearance at Circle City Raceway. Circle City, which opened for its inaugural season last year, brought the USAC AMSOIL Sprint Car National Championship back to Indianapolis for the first time in 37 years. The series will slide its way back into the Indianapolis dirt for two exciting days of racing, presented by Mastin and Cain Warehousing Services, Wednesday-Thursday, May 25th-26th during the week of Indy.

These two shows will carry on the long-standing week of Indy traditions like the Hoosier Hundred and the Hulman Classic, races that have been a staple of USAC racing for more than 65 years. With some of the greatest modern stars in the sport at Indy’s newest track, a tradition like no other will continue to prevail.

Last year, Tanner Thorson dominated the field after squeezing his way through a major collision in turn 2 on lap 11. Thorson then went on to lead, in comfortable fashion, the next 19 laps to take home his fifth and final win of his 2021 season. Far behind Thorson was 2nd place driver Chris Windom who spent much of the final laps holding off 3rd place finisher Jake Swanson. Thorson will look to repeat at Circle City and bring a bright spark to his 2022 campaign.

A great two days of racing is expected in southeast Indy for a week that brings incredible racing action to the epicenter of motorsports.

Pits will open at 3:00pm, followed by grandstands at 5:30pm, with hot laps beginning at 6:00pm, and racing to follow.

Tickets will be available at the gate on race day and are $25 for adult general admission, $20 for seniors, veterans, military, first responders, and teachers with ID. Kids tickets are $10 for ages 9-12 and kids 8 and under are free.

For more information visit www.circlecityraceway.com or www.trackenterprises.com and you can also call the Track Enterprises office at 217.764.3200.